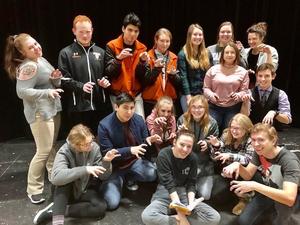 Towanda Jr/Sr High School Class of 2020 (and a few friends) will be presenting the annual class play fundraiser on Thursday, November 21st, Friday, November 22nd, and Saturday, November 23rd at 7:00 P.M. at the high school auditorium. This year's production is "Gone With The Breeze" by Tim Kelly with music and lyrics by Bill Francoeur by special arrangement with Pioneer Drama Service.

The play tells the story of the search for an actress to play "Jezebel O'Toole" in Lone Pine Films new extravaganza.  It is a spoof of the real-life search around the film, “Gone With The Wind’. There are twists and turns along the way.

There will be basket raffles and baked goods. Please come and support the students. Tickets are $8-general admission & $6-students and senior citizens.

Some of the cast members at a recent rehearsal are shown getting ready for the "Creature Feature" in “It’s a Crazy, Crazy Business” a rousing song from the show...